With the growing trend of using snow blowers to take care of clearing out driveways, many home owners are beginning to ask questions about this impressive machine. Question range anywhere from parts, to use, but perhaps the most important question that many people are asking is, how long should a snow blower last? It’s a reasonable question – you don’t want to be investing into something that simply isn’t worth your time.

To get a machine that should last these days, you’ll have to pay a hefty sum. However, if you are able to find a model that was built before the 1980s or is considered to be a higher end device today, you should be able to expect anywhere from 40 to 50 years of use – so long as you treat it with care! This being said, it’s easy to see how investing in a higher priced snow blower will pay off in the long run.

However, if you don’t have a large budget to work with, that doesn’t mean you can’t invest in heavy duty snow blower – it just means that you’re not likely to get as many years of use from them. If you buy a machine from a cheap vendor like Walmart, you can expect anywhere from 3 to 5 years of good use from the machine before you need to buy a new one.

If you invest in a machine from the lower price range of things (from manufacturers like Craftsman) you’ll be able to expect anywhere from 10 to 15 years of use from the machine. You’ll get more use out of an investment in a snow blower from this category, so this would have to be the recommendation that we’d make.

If your driveway is longer than 50 ft or doesn’t have an electrical outlet nearby, this might not be the best investment for you. However, if you meet these criteria, an electric snow blower could be an excellent investment. These snow blowers tend to cost less than gas powered snow blowers on average, leave less of a carbon footprint, and are easier to upkeep. You won’t need to worry about oil changes, spark plugs, or refueling – simply plug it in and clean out the auger every now and then.

Gas powered snow blowers are larger and more powerful. They are able to clear up to twice as much snow as their electric powered counterparts and aren’t confined to an electrical outlet or cord. If you have a larger driveway to work with, this will likely be the ideal choice for you. These mowers also tend to work more quickly and efficiently than their electric powered rivals.

This is because they have a more powerful fuel source backing them. If you have a large driveway or clear out snowy driveways for business during the winter, a gas powered snow blower would make a great investment.

What is an Alternator Used for on Snow Blowers?

If you want to get some early morning or late night work done with your snowblower, you’re going to need an ample source of light to work with. This is where an alternator comes in. An alternator, also called a stator, is a device that allows you to convert enough power to work with to power the light. However, should you choose to add an alternator you need to keep in mind that you’ll also need to add a fly wheel. This will help to provide enough magnetic flux for the alternator to run off of. If you want to undergo this project on your own, there are several tutorials available for use online.

What Is The Purpose of a Choke on a Snowblower? 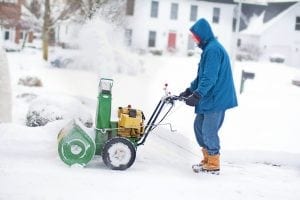 The parts on a snow blower are fairly simple to learn and straightforward to understand. However, many home owners still want to know exactly what these parts do and how they help to power their machines. If you have other home maintenance tools and machines at home, you’ve likely heard the term ‘choke’ before. However, although many are familiar with the part and know how to use it (close the choke, then open it once your machine begins to run), not many home owners understand what a choke is used for.

The choke on your machine is used to help you get your engine to start more quickly. When you close the choke, the engine can start itself with as little air exposure as possible. This makes the fuel mixture more rich and dense, which in turn makes it easier to start up your device. Once your engine has started, you’ll be able to open the choke back up – you no longer need an especially dense fuel mixture to keep your machine running.