When you are considering buying a compound miter saw, you may not know right away which type of saw you should buy. There are a multitude of different types and models of miter saws with many differences that, if you are not informed, can be quite daunting. If you know you are looking for a saw that will make bevel cuts, that’s a first step in the right direction, and from there you know you will need to buy a compound miter saw (click here for the top 10). From there, things can get a little hairy.

If you’re working on a project that requires you to make angle cuts in two planes, for example, in crown molding and picture frames, then usually a single-bevel compound miter saw will suffice. This type of saw will pivot to allow you to make angle cuts either on the left or the right. It can also make bevel cuts but only in one direction, hence the name “single bevel”.

This saw can also be manipulated on both axes when you need to make compound miter cuts. However if you need to make matching cuts you would have to flip over the workpiece and reset the angle to make sure it’s accurate before moving on to the second bevel cut.

A good example of a single-bevel miter saw would be the Craftsman 10″ Single Bevel Sliding Compound Miter Saw – which does the job well with many features, including a powerful 15-amp motor that delivers high torque and speed that goes up to 4800 rpm, ready to perform well and slice seamlessly through all densities of wood.

This miter saw provides precise, smooth cutting with laser guided protection and uses smaller blades that are easier to maintain, but still delivers the capacity to spin through boards up to 12-inches wide. The 0-50 degree miter adjustment includes common positive stops, and the blade guard protects it from accidental bumps during use. 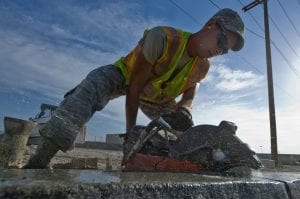 With a dual-bevel compound miter saw, however, allows you to make compound cuts in both left and right directions without having to turn your piece over – instead, you just use the pivoting arm to accurately flip the saw. For example, if you’re planning to make a lot of crown molding that requires compound miter cuts, this tool will give you most convenience and the fullest range of compound angles that are both right and left, without having to hand-manipulate the moldings on the saw to cut them.

An example of a good dual-bevel miter saw is the Milwaukee 6955-20 12″ Sliding Dual Bevel Miter Saw that is designed to make setting precise bevel and miter levels easy with a miter angle fine adjust, and detent override which is a digital display that shows you the correct angle down to one-tenth of a degree.

A bevel cut is made by tilting the blade at a specific angle. so instead of cutting along the width of your wood, you’ll be cutting diagonally against the thickness of it. A miter cut is where you are cutting along an angle of wood, with the blade coming down vertically.