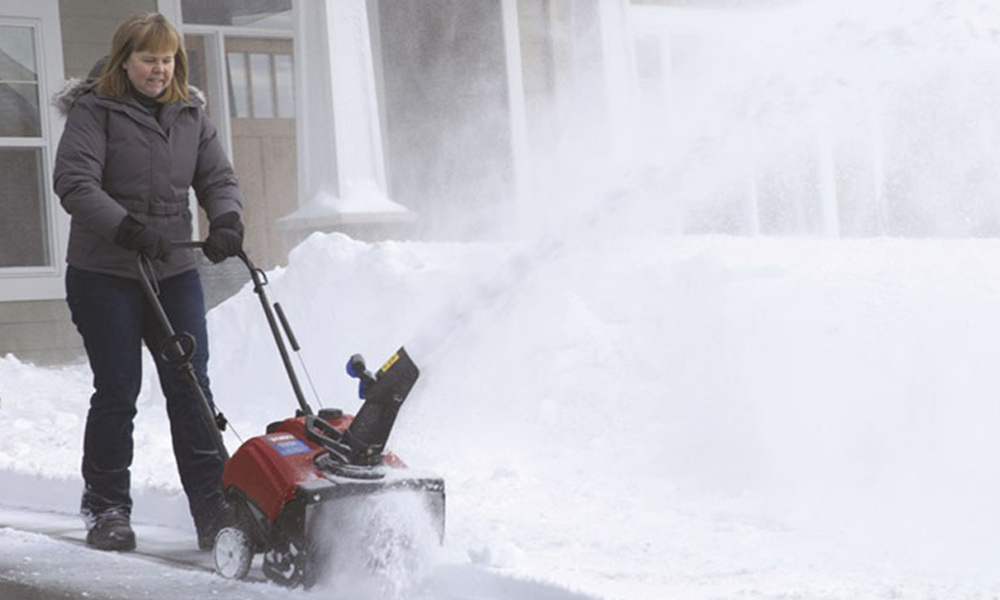 The Toro 518 ZE is a single-stage snowblower that is priced at a very affordable price point. It boasts an array of accessibility features and is intended to be used in a small- or medium-sized driveway. It lets you aim where you want your snow to end up with its locking deflected, which is a feature that few snowblowers have. 518 ZE is powered by a Toro Premium 99cc OHV 4-cycle engine.

It can be used by an array of customers because of its compact size and simple control features. It is not meant for commercial or industrial settings and is used most effectively for residential properties. Both those with previous snowblower experience and those who are new to the game had success assembling and operating this snowblower.

The Toro 518 ZE is a medium-sized machine and is built to shred snow quickly. It also works to reduce the clogging with its curved paddles and funneled housing, which keep it going uninterruptedly. To start the Toro, is fast, as all you have to do is press the button thanks to its electric starter. If the easy start doesn’t work, you can also use the pull start and pulling it once or twice is usually enough to get it going. It has a two pull guarantee, which ensures that by the time you make it to your second pull, the Toro will definitely start up.

The Toro 518 ZE can clear 18 inches wide and 12 inches high at a time. It can cut through dense snow and ice and then launch it up to 25 feet away. The machine itself is 45 inches tall, 18 inches in width, and 37 inches in depth. It only weighs 58 pounds, so it can also easily be lifted if needed. The operation of the machine itself is not much different from running a lawnmower and is easy to pick up.

Easy to Transport and Store

One of the main perks of this single-stage snowblower is that it is relatively compact. It also has a handle and chute able to be folded down when you’re not using it. This makes it easy to transport and store, even if you don’t have a ton of space in your garage or car. Larger snowblowers can inhibit those who live in residential areas or smaller houses or apartments. However, this snowblower is built not to take up too much room. It is mainly geared toward personal use and is built accordingly.

What Do Real Customers Have to Say?

This product received an even combination of negative and positive feedback. Those who gave it the best feedback reported using it in a smaller area and made sure that the gas it uses to run stayed fresh. Those who took the best care of the product and used it as intended had the best experience. Even some people happy with the product may have had minor issues with particular aspects of the construction. However, the product has a two-year warranty, so if you notice an issue within that time, it can be fixed or replaced free of charge.

Impressive Power for Its Size

With this snowblower, customers are impressed with the speed and power that it generates. Although it is small, it stacks a lot of potential in its stout body. It also requires assembly, but customers reported that it is quick and easy to assemble; the user manual provides clear directions, and Toro offers troubleshooting in the event of running into any difficulty.

Other customers pleased with the product say that the engine runs smoothly, the shoot rarely gets clogged, and that it is easy to start. It is lauded as being exceptional for its size, and convenient because it uses synthetic oil as opposed to a mixture of oil and gas. Although it is small and doesn’t have a lot of frills, consumers are pleased because it does its job, and it does it well.

One of the main issues that customers have with this product is that the blades are made of plastic and if they suck up something they are not meant to they will break. This applies to rocks, large sticks, and other miscellaneous objects. What you may run over is not always predictable under the snow, so this can’t always be prevented. The body of the snowblower, as well, is made of plastic, so it is not as durable or impervious as its steel counterparts.

Another common grievance with the Toro 518 ZE is that in some models the gas tank leaks. One customer reported that their gas tank leaked in three different spots from the time when they received the Toro 518 ZE. However, since many complaints were filed on the gas tank, it has been recalled and replaced with a newer version. This has eliminated the problem for those who are purchasing newer models, but those with older models should be wary.

The Toro 518 ZE has received an overwhelming amount of positive feedback compared to negative feedback. It is a single-stage snowblower that is small, yet powerful. It is easy to use and can be transported with no trouble. The two-year warranty ensures that if there are any part defects or issues, the snowblower will be fixed or replaced.

The Toro 518 ZE is a good option if you are looking for a powerful snowblower for a small to a medium-sized tract of land. It works best when the fuel is kept fresh, and it is adequately taken care of. It functions well in mild-to-moderate snowstorms and is engineered specifically to avoid jamming.